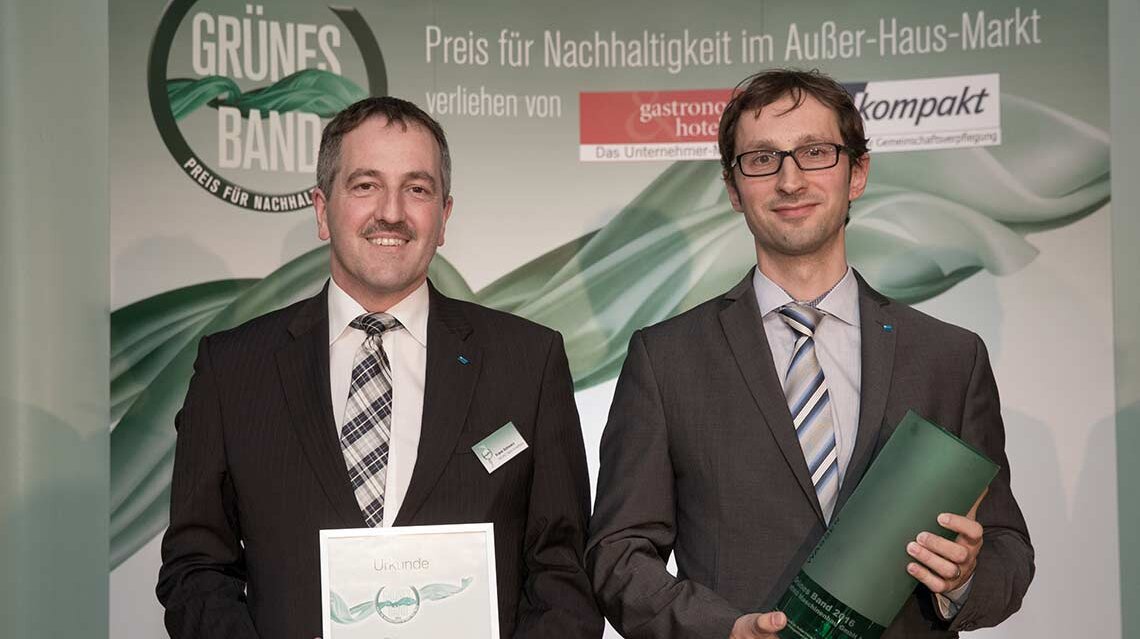 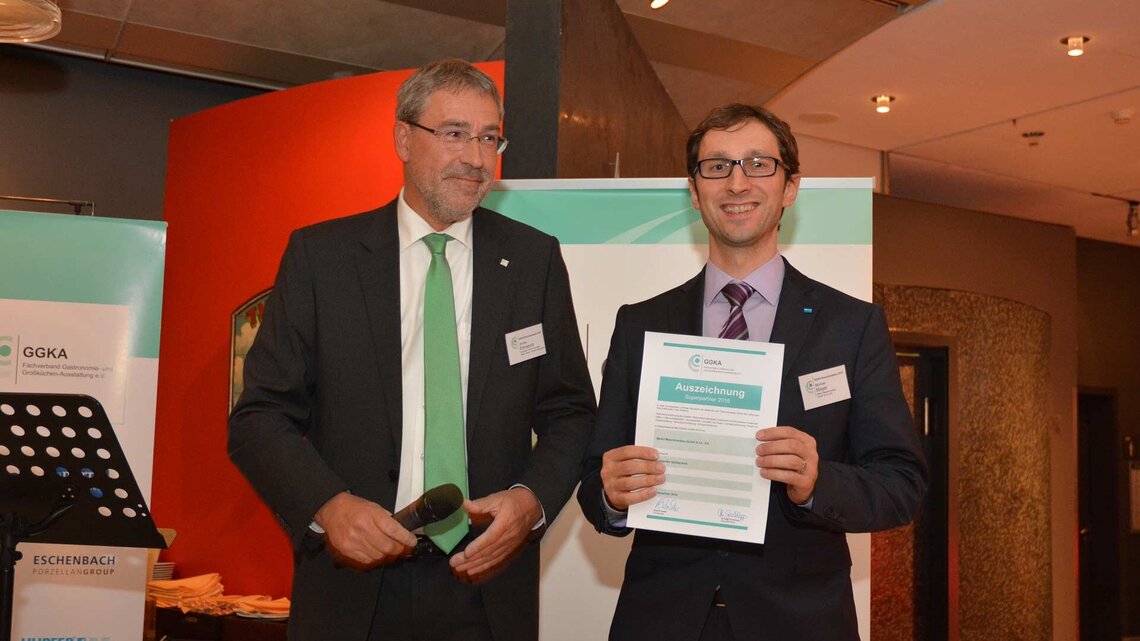 There were congratulations all round at the Intergastra exhibition in Stuttgart, with warewashing equipment manufacturer MEIKO taking home the prestigious Grüne Band sustainability award from German publisher Huss-Medien Group in the ‘Water’ category. The company was also honoured as a ‘Super Partner’to specialised retailers by the German trade association for restaurant and commercial kitchen equipment GGKA.

The German trade association for restaurant and commercial kitchen equipment GGKA recently completed the process of evaluating and grading its suppliers for the fifteenth time. The Board members of the GGKA association, which is headquartered in Cologne, invited 19 prizewinners onto the podium to accept their awards.
GGKA members rated the candidates in a total of nine categories on the basis of seven criteria – and it was MEIKO that came out on top among the manufacturers of dishwashing equipment.
On a scale of 1.0 (best) to 4.0 (worst), the company received an overall score of 2.27 based on the assessment of criteria including quality, susceptibility to faults, sales support and revenue realisation. The comparable average for the category was significantly lower, at just 2.68.
This award is seen as particularly prestigious because votes are cast directly by specialised retailers in the industry.

Michael Mayer, head of sales for Meiko warewashing equipment in Germany, Austria and Switzerland thanked GGKA for the award: “We’re tremendously proud to have been ranked as a ‘Super Partner’, and particularly pleased that we took a premier position in the ‘Large Equipment’ category. We’re grateful to have received such a prestigious award. It will motivate us to solidify our position as a market leader.”

For the third time, the Intergastra exhibition in Stuttgart played host to the presentation of the prestigious sustainability award from the Huss-Medien Group in the six categories of water, energy, climate, ecology, fair trade/social responsibility and corporate concept. The winners were chosen by an expert jury and the readers of the trade journals ‘Gastronomie & Hotellerie’ and ‘GV-kompakt’.

Sustainability has made major inroads into the hospitality and food service sectors, with concepts such as energy efficiency, environmental stewardship and fair trade becoming firmly established in the market. To remain successful in a competitive market, restaurant and catering managers are now faced with the challenge of creating strategies and solutions which meet both business-focused and eco-friendly criteria. That requires partners from the supplier industry that share the same philosophy and the same determination to offer products that promote sustainable production and consumption patterns.

Now MEIKO has yet another reason to celebrate. Having already received the sustainability award in 2012, MEIKO has done it again in 2016 in the Water category with its M-iQ GreenEye technology®. Achieving reductions of up to 50 percent in fresh water and rinse agent, GreenEye is an innovation which optimises capacity utilisation to maximise savings. Using a smart system of indicator lights, it facilitates teamwork between the machine and its operators and ensures an efficient cleaning process.

Having already accepted the Super Partner award the evening before, Michael Mayer was delighted to receive yet another prestigious prize: “Many thanks to all the readers of the ‘GV-Kompakt’ and ‘Hotellerie & Gastronomie’ trade magazines. It’s a privilege to be awarded this sustainability prize in the Water category. Water is truly MEIKO’s element, because achieving reliably hygienic warewashing results would be impossible without it. It is one of the most precious elements on our planet, and something which deserves to be protected. We hope that our ideas go some way toward helping conservation efforts – this award will inspire us to keep working on even better solutions.”

MEIKO is a value-driven company which has firmly anchored the concept of sustainability in its corporate culture. It follows the maxim that companies should think in terms of generations, not quarters. That belief is reflected both in its product development strategy and its production processes.